You’ll learn the differences, and understand how each locking mechanism might (or might not) affect your buying decision for your next knife.

END_OF_DOCUMENT_TOKEN_TO_BE_REPLACED

Owning a Japanese knife is a great asset in the kitchen. But to get the most out of them, you need to sharpen them. The edge of knives naturally dull out after prolonged use, so sharpening them is your best guarantee to keep the knives as sharp as day one. But learning how to sharpen Japanese knives is not difficult.

Below is a quick guide on what you need to sharpen and care for almost any Japanese knife, as well as the step-by-step process in doing so.

END_OF_DOCUMENT_TOKEN_TO_BE_REPLACED

The culinary world is an entirely different universe with its own set of rules and cultures. Some cooks prefer to do things a certain way, while some scoff at others who cling too much to tradition.

But one idea that is almost universal in the kitchen. A Japanese knife will always be one of the top choices when picking knives.

The sheer quality and craftsmanship of these knives are top-notch, which means that their prices are just as high. Here we take a look at why Japanese knives are so expensive.

END_OF_DOCUMENT_TOKEN_TO_BE_REPLACED

Vegetables are an important ingredient in most dishes of cuisines from across the world. To prepare them properly and safely, you need the right knives in your knife set. Two types of knives that are predominantly used for preparing vegetables are the Usuba knife and the Nakiri knife. These are both Japanese knives that are used in the preparation of vegetables for Japanese cuisine but are also popular elsewhere in the world and just as suitable for any type of cuisine. Here is a comparison of the Usuba vs Nakiri knife, including the characteristics, pros, and cons of each to help you to decide which vegetable knife is best for you to grab.

The Short Version: Should You Use Nakiri Or Usuba?

For preparing vegetables, unless you’re a professional chef, you probably should be using a nakiri knife. They are easier to use, safer, and cheaper.

Kicking off our comparison of the Usuba vs Nakiri knife, Usuba knives can offer more precision for fine & decorative work, being incredibly sharp, but are really meant for those who are specifically trained to use them. They are sharpened on only one side (single bevel), and typically heavier & longer.

We have a whole article on the best Nakiri knives, but in case you’re looking for a quick recommendation, here are 3 of the top choices. 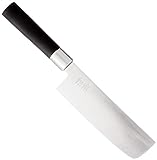 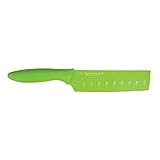 That’s the answer in a nutshell. If you still want to dive in and learn more, let’s get started!

What is a Usuba Knife?

The Characteristics of a Usuba Knife

There are some characteristics that define an Usuba knife. These are:

What is a Nakiri Knife?

A Nakiri knife is also a Japanese vegetable knife, although this is favored for home use rather than in professional kitchens. Its name means ‘leaf cutter’, which relates to its use preparing vegetables. The Nakiri and Usuba knives are very similar, although there are some differences. The most important of these is the different blade edge.

The Characteristics of a Nakiri Knife

Although a Nakiri knife has many similarities to a Usuba knife, there are some characteristics that define this type of knife. These include:

The Pros and Cons of an Usuba Knife

Like any piece of equipment, there are both pros and cons to choosing an Usuba knife. Some of the benefits of this type of knife include:

There are also some downsides to the Usuba knife in comparison to the Nakiri knife. These include the following:

The Pros and Cons of a Nakiri Knife

There are, of course, advantages to choosing a Nakiri knife. Some of these include:

While there are many advantages to having a Nakiri knife, there are very few disadvantages to having this piece of kitchen equipment. The only downside is that it is less specialized than the Usuba knife and you might not achieve the same cuts. However, this is unimportant to most amateur cooks. ❌

Most people use vegetables as ingredients when they are cooking. Therefore, both these knives are a useful addition to your knife set. However, there are some differences between the two. So, in terms of comparing the Usuba vs Nakiri knife, is one better than the other?

Overall, the better choice is the nakiri. It is a versatile knife that costs significantly less than the usuba, in most cases. It is also lighter and easier to sharpen. The only reason to choose the usuba knife over the nakiri is if you are a professional chef who needs a knife for precision cutting and you use skilled cutting techniques to create decorative items.

Indeed, with the right skill, a usuba knife can do everything that a nakiri can. But, since they’re more expensive, it really doesn’t make sense to do that 9 times out of 10.