Only 10% of the world’s population are left-handed. That’s not an insignificant amount by any means. However, it does also mean that in the field of design and ergonomics, these people often get left behind. When designing a particular object for use by the hand, left-handed people are often considered as afterthoughts. It’s evident with the way that various everyday items are constructed. Pens, car gear shifts, pant zippers, can openers, desk armchairs, scissors, guitars, camera shutter buttons, and of course… knives.

What are you looking for? Click on a knife type to skip down 👇

The Plight Of Lefties…

It’s just a sad and unfortunate fact that a lot of the things that we rely on to stay productive on a daily basis are designed for right-handers. For the most part, this is a struggle that lefties have to contend with every day. And for righties, it’s a complete afterthought. They don’t pay attention to such details at all. When a rightie wants to buy whatever kitchen knives they want right off the rack without caring about whether it’s made for their hand or not. However, lefties are always left to either really scavenge for specialized knives or settle for a knife that wasn’t made for them. You would never see any consumer product labeled, “This was designed for right-handed people.” But these are the kinds of labels that lefties always have to look for when buying certain things.

Not many people realize that there are left-handed or right-handed knives to begin with. It’s probably only those who really take their knife usages very seriously who notice slight hints of discomfort and impracticality. Also, a lot of knives these days are designed to be ambidextrous in nature. This means that they are designed to be comfortable for both left and right-handed people.

You might be asking yourself what makes a knife left-handed, right-handed, or ambidextrous to begin with? Well, for the most part, it has to do with how the edges of the knives are laid out.

To put it simply, a beveled knife is what its name implies. It’s a knife with a blade that has bevels on both sides. When you look at the blade from a top perspective, you will see that both sides are slanted and sharpened equally. This means that the knife has a blade that is equipped for both lefties and righties. The double-beveled knife is typically known as the ambidexter knives as it allows for comfortable use by both left-handed and right-handed individuals.

On the other side of the spectrum, you have single-beveled knives. These are the knives that are slanted and sharpened on only one side. So, when you are looking at the blade from a top perspective, you will see that the blade has an asymmetric oblique cut. These single-beveled knives tend to not be very popular among the masses. However, they are a go-to for chefs and culinary enthusiasts who look for precision slicing instruments.

These kinds of knives evoke the traditional Japanese katana swords that were used by ancient Samurai and Ninjas. This contributes to its popularity in traditional Eastern culinary arts. Since the blades are only slanted on one side, then that particular side is the only one that requires sharpening.

So without further ado, let’s get into the product recommendations. Again, please remember: double-bevel knives are ambidextrous, and as such are included here. Actually, the vast majority of these are double-bevel (with exceptions, e.g. sashimi knives). If you are ever looking for a single-bevel knife, that’s when you need to be extra careful as a leftie.

The gyuto or chef’s knife is typically what you would consider to be an all-around knife. It’s a versatile knife that’s capable of doing everything in the kitchen including chopping, slicing, and dicing. If you don’t plan on splurging on a large collection of knives, and you need just a few essentials, a gyuto is a definite must-have. If you’re only going to buy one knife for regular use, make it a gyuto knife. 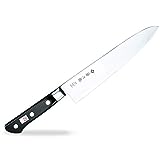 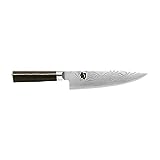 If you’re looking for more budget options, check out this article to choose a budget gyuto knife for <$90.

A santoku is very much like a gyuto in the sense that it is a knife that’s designed to be versatile and multi-purpose. However, it differs from the traditional gyuto with the shape of its blade. The chef’s knife typically has a pointed tip whereas the santoku knife has a curve running along the spine of the blade towards the edge. 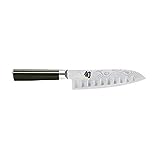 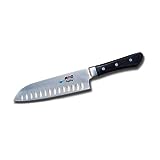 A sashimi knife, also known as yanagi or yaganiba, as its name suggests is a knife that is designed for slicing sashimi. This is a traditional japanese dish that typically consists of small slices of raw meat served with soy sauce and wasabi. A dedicated sashimi knife or yagani consists of a single bevel and are typically designed to have very thin blades for precise slicing. Most yanagi knives are made out of carbon steel.

Reminder: these really are left-handed, not ambidextrous. 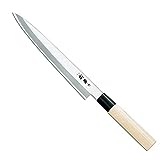 The usuba literally translates to having a thin blade. So, as you may have guessed, an usuba knife is one with a very thin blade and is used mostly by professionals to cut vegetables. The usuba is normally used for very specific purposes due to its unusual height and straight edges.

Comment on this for clarification ☝. It is indeed a double-bevel knife, suitable for both left and right handers. Some confusion has arisen due to the 70/30 micro-bevel edge.

Comment from the manufacturer: “The blade of this knife would be suited for both lefties and righties since the micro-bevel on top is so insignificant that it would not affect the actual 50/50 construct of the blade”

The nakiri knife or the nakiri bocho is a traditionally Japanese-style knife. It’s designed as a knife that specializes in chopping vegetables. Its most notable features include having straight blade edges and squared tips. When designed properly, a nakiri knife enables the user to cut all the way through a vegetable without exerting any horizontal pushing or pulling force. 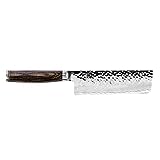 This Dalstrong knife is made in Germany, but is still very-much worth including as a recommended Nakiri knife for a very reasonable price.

The deba knife is a Japanese knife with a pointed blade. Most chefs typically use the deba for slicing fish. However, it can also be used for slicing meat and poultry. While it is a knife that does well in heavy slicing tasks, it is not an advisable tool for slicing through bones.

Consider the amount of time and energy that is poured into the design and ergonomics of a knife’s handle. There are all sorts of studies, mockups, and experiments that go into designing how a handle is constructed. When you don’t take a person’s dexterity components into consideration in the design of a knife, it can make for a rather underwhelming and sometimes unpleasurable experience. Again, you don’t really need a left-handed knife. But if you’re going to spend a lot of money on a proper kitchen knife, you want to make sure that it’s one that fits your hand like a glove.

Mostly, it all boils down to personal preference. If you feel like you can get away with using an ambidextrous knife for the rest of your life, then do so by all means. That’s your prerogative. For some single-bevel knives for specific uses e.g. sashimi knives and usuba knives you’ll struggle without a specific left-hander. But for the average home cook, chances are you may never need such specialist knives. Many people have gotten the job done with a versatile and multifunctional ambidextrous knife without much hassle. But if you’re a leftie who is looking for cleaner, thinner, and more precise cuts, then you might want to look into more specialized options. Whatever the case, there’s bound to be a knife out there that serves your desired purpose.